Anxiety disorders are the most frequent psychiatric disorders in children and adolescents, affecting between 15 – 20% of youth (Kessler et al., 2012). Anxiety disorders in youths are associated with increased morbidity and mortality and an increased risk of suicide attempts (Foley et al 2006; Jacobsen et al., 2008).  Longitudinal data suggest that young people with anxiety disorders are three times more likely to have anxiety or depression in adult life (Pine et al., 1998), they are also at increased risk of substance misuse.  Child and adolescent anxiety disorders are linked with poorer long-term general health and functioning, as well as interpersonal, financial and educational difficulties (Woodward et al, 2001). Early and effective treatment may help prevent continuity of psychopathology into adulthood.

There is considerable heterogeneity in the onset of specific anxiety disorders, with GAD, phobic anxiety, panic disorder and OCD mostly emerging in adolescence (Wehry et al., 2015).

There have been significant advances in the understanding of the neurobiology of childhood anxiety disorders in recent times, with dysfunction in the pre-frontal amygdala-based circuits being widely implicated (Strawn et al, 2014).  The amygdala, responsible for the initiation of the fear response, is often “over-activated” in fMRI.  Intrinsic functional connectivity networks between the amygdala and the pre-frontal cortex, anterior cingulate cortex, insula and cerebellum have also been implicated.  The ventrolateral pre-fontal cortex (VLPFC), which regulates amygdala activity and plays a role in the extinction of the fear response, is also hyperactivated in youths with anxiety (Blackford et al., 2012). 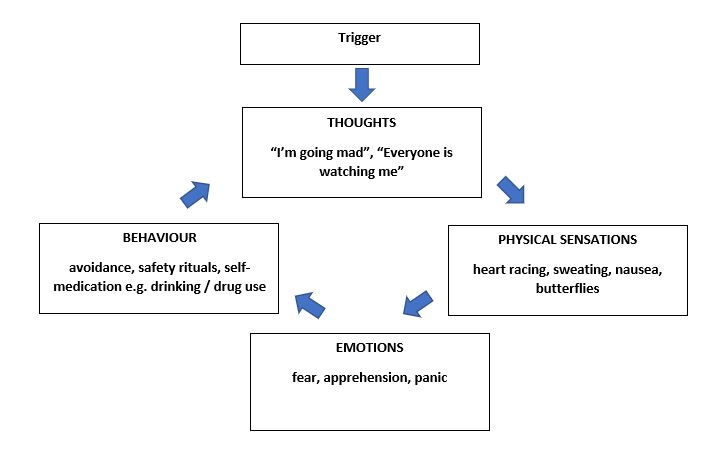 Practice parameters from the American Academy of Child and Adolescent Psychiatry (AACAP) recommend screening for anxiety symptoms, noting the severity and functional impairment and assessing for co-morbidity.  Screening for general medical conditions that may mimic anxiety is also recommended. Evaluation should differentiate from developmentally appropriate worries and fears, and should consider stressors or traumas that may be contributing to the anxiety.  Anxiety-related symptoms such as crying, irritability or anger outbursts, which are sometimes misinterpreted by adults as oppositionality or disobedience, may represent the young person’s distress and efforts to avoid the anxiety-provoking stimulus.

The Childhood Anxiety Multimodal Study (CAMS), involved 488 youths aged 7-17 years. This study showed that monotherapy with sertraline (55% response) is as effective as CBT for anxiety (60% response) compared with placebo (24% response), and that a combination of sertraline and CBT is most likely to be successful (81% response). Some 80% of acute responders maintained their positive response at follow-up (24 and 36 weeks). Six-year naturalistic follow up of this group suggested that results were maintained with remission rates of 52% (sertraline only), 49% (combination therapy), and 46% (CBT only).  Nearly half of responders had relapsed during the follow-up period suggesting that extended treatment is needed to maintain treatment gains (Piacentini et al., 2014).

SSRIs are the medications of choice for the treatment of anxiety disorders in children and adolescents. A summary of randomised controlled trials of SSRIs in treating anxiety disorders in youths indicates that the benefits outweigh the risks for most SSRIs (sertraline, fluoxetine, fluvoxamine and paroxetine), there is insufficient data for the remaining SSRIs and the serotonin and norepinephrine reuptake inhibitors (SNRI) desvenlafaxine (Garland et al., 2016). For Venlafaxine XR, one publication showed positive results but lower effect sizes than SSRIs and significantly higher adverse effects compared to placebo (Rynn et al., 2007). The number needed to treat for most SSRIs and SNRIs over placebo is estimated between three and six (Bridge et al., 2007).

Sertraline and fluoxetine have been approved by the Food and Drug Administration) (FDA) for the treatment of paediatric OCD and are first-line treatments for anxiety.  SNRIs could be considered a third-line treatment for anxiety disorders when two trials with different SSRIs prove ineffective.

Physical side-effects of SSRIs include headaches, gastric upset, insomnia, hypersomnia.  Emotional/behavioural effects include hyperactivity, irritability dis-inhibition and self-harm (Elbe et al., 2014). The FDA issued a black box warning in 2004 for concerns related to worsening of depression, agitation and suicidal ideation linked to SSRIs.  Studies report one excess case of suicidal ideation or self-harm per 100 treated individuals with anxiety compared to placebo, and two excess cases of suicidal ideation or self-harm per 100 treated individuals with depression compared to placebo (Hammad et al., 2006). However, overall SSRI treatment significantly decreases suicidal ideation and suicide attempts in young people and it is far more likely that SSRI use decreases suicide rates rather than increases them (Mosholder et al., 2004).

The efficacy and safety of buspirone and mirtazapine in young people with anxiety disorders are not known, although open label studies suggest that they might be effective in relieving anxiety symptoms. Benzodiazepine use is not supported by clinical trials in youths and may lead to paradoxical disinhibition. Rarely, benzodiazepine use can be considered in practice to potentiate the therapeutic effect during initial titration of SSRIs or to mitigate adverse effects, and for rapid tranquillisation.

As a general rule when prescribing in adolescents, start at the lowest available dose and monitor closely, usually within a week or two of starting treatment.  Dose increases are done cautiously and with careful monitoring, overall therapeutic effect should appear within six to eight weeks of treatment.  Medications, if effective, should continue for at least one year of stable improvement. Tapering of medications, when indicated, should also be done slowly to minimise the risk of discontinuation symptoms.

CBT is a well-regarded and effective evidence-based treatment for child and adolescent anxiety disorders (Compton et al., 2004). CBT has several key components including psychoeducation, somatic skills training (relaxation, breathing exercise), cognitive restructuring by challenging anxiety-provoking thoughts and negative self-talk, problem solving; systematic exposure and desensitisation to the feared situation; relapse prevention (Albano et al., 2002).  A number of studies have also shown benefit of group CBT in youths with anxiety (Barrett et al., 1998). CBT is not effective for all youths with anxiety disorders, a portion may continue to meet criteria for an anxiety disorder after treatment.

Although often used, evidence for psychodynamic psychotherapy for youth anxiety is sparse and more studies are needed. Mindfulness has been increasingly used recently to promote health and wellbeing, Randomised controlled trials in anxious adults show significant improvement in anxiety symptoms (Hoge et al., 2013). Studies of mindfulness-based interventions are more limited in children and adolescent however this represents an area that warrants further investigation.

Mild cases of anxiety can usually be treated in the community with psychoeducation and individual psychological intervention, for example CBT, depending on locally available resources.  Factors that influence referral to specialist adolescent mental health services include illness severity, co-morbidity, risk management, positive family history or family dysfunction. Medications can be used for people presenting with a moderate to severe level of impairment in conjunction with individual therapy.

Dr Una Dennison, MB BAO BCh MRCPsych MD is a Consultant Child and Adolescent Psychiatrist working with St. Patricks Mental Health Service since June 2018 following relocation from London where she worked with the NHS as a Consultant Child and Adolescent Psychiatrist.  Dr Dennison has experience working with young people and their families across a wide variety of settings including both out-patient, inpatient and liaison CAMHS.  She has experience leading a Neuro-Developmental / Learning Disability Team in the UK. Dr Dennison has a special interest in inpatient adolescent psychiatry and adolescent eating disorders and has spent time working in a specialist adolescent eating disorders unit at the Priory Hospital, London.  She has also worked in Sydney, Australia.

She has a strong teaching background, having spent 18 months working as a clinical lecturer / tutor in psychiatry in University College Cork and has experience teaching a mixture of audiences at both under-graduate and post-graduate level, including post-graduate, medical and secondary school students, allied health professionals and GP’s. She completed a Masters Degree by Research on immune dysfunction in schizophrenia and bipolar disorder and has several publications relevant to this field.

Founder’s Day 2019 to focus on anxiety

We provide free support and information for GPs and healthcare professionals regarding services available in St Patrick's.