This World Suicide Prevention Day, St Patrick’s Mental Health Services is calling for the introduction of a nationwide mental health awareness-raising and anti-stigma programme for young people, as well as comprehensive counselling and treatment services for children and young people.

The call follows this year’s Annual Attitudes to Mental Health Survey, commissioned by St Patrick’s Mental Health Services, which showed that mental health stigma remains a chronic problem in Irish society – with 61% of adults believing that treatment for a mental health difficulty is still seen as a sign of personal failure.

In addition to the stigma survey results, research conducted earlier in the year by DCU and funded by St Patrick’s Mental Health Services, showed that primary schools are dealing with very young children with serious mental health difficulties and that the absence of a nationwide, dedicated primary schools counselling service is placing huge pressure on teachers, who are ill-equipped to respond to students in distress.

The Annual Attitudes to Mental Health Survey, which questions a nationally representative sample of 500 adults, shows that, year-on-year, there are no significant improvements in how Irish people perceive mental health, despite the fact that 26% of this year’s respondents have been treated for mental health difficulties, and a further 38% are aware that a close family member has been treated.

Each year that the survey has been conducted, some worrying attitudes have been revealed, with 2018 proving no exception as findings show:

The findings indicated that:

Commenting on these findings, St Patrick’s Mental Health Services CEO, Paul Gilligan, said: “It is imperative that we take a comprehensive national approach to breaking the cycle of harm caused by mental health stigma and that we establish the appropriate supports and treatment services, particularly for children and adolescents. We need to build an open and supportive society for our youngest, most vulnerable citizens and no longer allow stigma and prejudice needlessly impact people’s lives.”

As part of this, the importance of educating children about mental health and normalising the conversation from a young age was emphasised: “As a society, we have taken two steps forward and one step backwards. While there’s no doubt efforts are being made to raise mental health awareness, unfortunately year on year our survey findings show that a deep-rooted stigma still prevails in Irish society.”

Mr Gilligan continued: “The education and conversation around mental health needs to start from childhood, ideally as part of the primary school curriculum, to ensure that mental health stigma isn’t passed from generation to generation. Parents and teachers are uniquely placed in ensuring that children learn about mental health from an early age, in an environment that is open, and free of stigma and prejudice.”

Other findings revealed in this year’s stigma survey include: 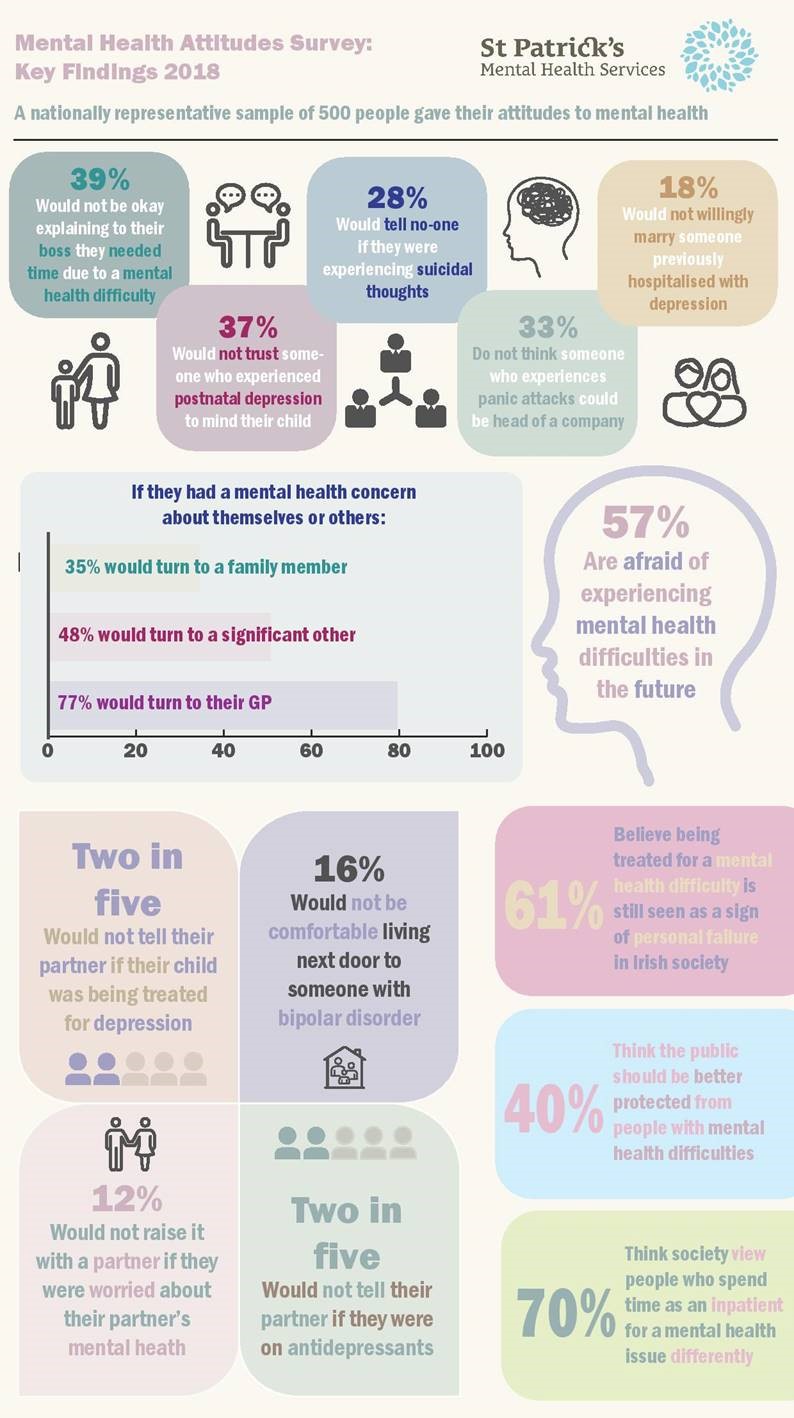