To mark Pride Month, Emer Long from our Psychology Department celebrates the LGBTQI+ community and explores why we need to talk about LGBTQI+ mental health.

Pride Month is an opportunity to celebrate the Lesbian, Gay, Bisexual, Transgender, Queer/Questioning, and Intersex (LGBTQI+) community. It is a time to celebrate their experiences, their contributions, and the impact they have had on history, nationally and internationally.

Pride is celebrated each June in honour of the 1969 Stonewall Uprising, led by Marsha P. Johnson, an African-American transgender woman. This was a seminal event in LGBTQI+ history, which marked a turning point in the community’s activism.

Throughout Pride Month, we celebrate how far LGBTQI+ rights and acceptance has come, while also holding space to reflect and bring awareness on how much more there is yet to achieve. From its inception, Pride was, and is, a call for greater rights, equity, and safety for the LGBTQ+ community.

Its underlying sentiment is universal:

the freedom to be our authentic selves without shame or fear, and the right to equal treatment and representation, is a right held by all and given without prejudice.

Why we need to talk about LGBTQ+ mental health

Why we need to talk about LGBTQ+ mental health

The LGBTQI+ community highlights the spectrum of gender identities, sexual orientations, and gender expressions. In terms of mental health, like anyone, LGBTQI+ individuals carry their own unique and personal histories in relation to their upbringing, age, race, ethnicity, religion, socioeconomic status, and life experiences.

Although the majority of LGBTQI+ people lead happy, healthy, and fulfilling lives, evidence from both Ireland and internationally highlights the disproportionate levels of mental health challenges experienced by LGBTQI+ people.

Findings from the Supporting LGBT Lives Study demonstrate the continued challenges faced by the LGBT+ community in Ireland. This study highlighted that 80% of LGBT+ people have been verbally abused because of their identity, 40% had been threatened with physical violence, and 25% had been physically assaulted.

Given these experiences, it is unsurprising that the study also highlighted that LGBT+ people were four times more likely to experience severe levels of depression, anxiety, and stress than non-LGBT+ people.

From a wellbeing perspective, the report also noted that 81% of participants were now comfortable with their LGBT+ identity and the majority reported good self-esteem and satisfaction with their lives. Over two thirds of people had come out to all of their immediate family and friends and 96% were out to at least one person.

Although, in recent years, Ireland has become more inclusive of the LGBTQI+ community, older LGBTQI+ adults may have faced particular challenges associated with their sexuality and gender identity or expression during their lives. Many older LGBTQI+ individuals have lived through past historical, societal, and cultural ideas which were placed on homosexuality and gender expression, with the additional fear of the legal constraints and criminality associated with same-sex relationships.

Historically, it is important to remember that the LGBTQI+ community was marginalised, shamed into secrecy, and socially excluded. The Visible Lives research published by the Gay and Lesbian Equality Network (GLEN) documents the social, psychological, and emotional impact that living through these experiences has had on older LGBTQI+ adults.

Important findings from this report include:

The mental health difficulties faced by the LGBTQI+ community can, in part, be linked to the factors below.

Minority stressors are the unique and additional stressful events that are specific to minority groups, such as the LGBTQI+ community. These put people are a higher risk of developing mental health difficulties. These experiences are unique (not experienced by non-stigmatized groups), chronic (related to social and cultural structures), and socially based (built and reinforced within social processes, institutions, and structures).

Five types of minority stress that impact on the LGBTQI+ community are:

Members of the LGBTQI+ community are at a greater risk of experiencing hate crimes compared to people who are heterosexual and cisgender (someone who identifies as the gender they were assigned at birth). Transgender, or trans, people are the most at risk.

Other factors which can impact on LGBTQI+ mental health include: 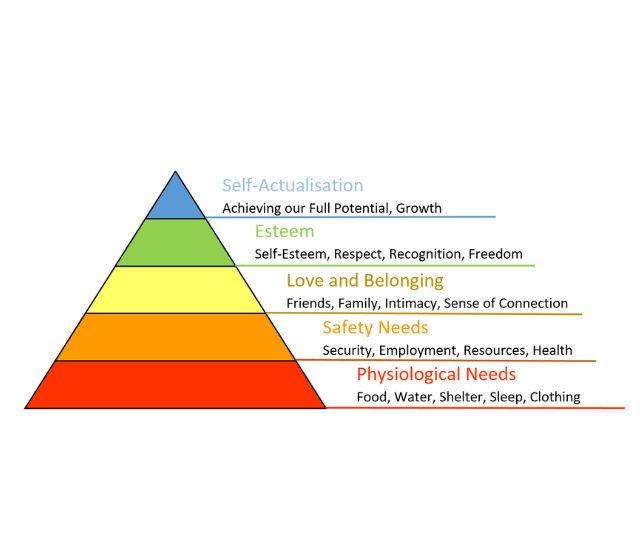 The impact of these experiences on the LGBTQI+ community can be thought about in the context of Abraham Maslow’s hierarchy of needs. Maslow’s original theory, often represented in the hierarchy seen here, describes the five stages or “needs” that he believed were necessary for people to find fulfilment and satisfaction in life.

When we consider the challenges that the LGBTQI+ community faces on a daily basis, we can begin to better understand how significant the impact can be.

When people’s needs are chronically unmet, particularly basic needs such as physiological or safety needs, this can lead to physical as well as mental health challenges. For example, if we cannot secure safe housing, experience discrimination in the workplace, or feel rejected by family or friends, our mental health will be affected.

Given that the LGBTQI+ community is more likely to experience discrimination - particularly in the first four areas of Maslow’s hierarchy - it is important that we take action to support the community and bring about change.

Knowing the possible reasons behind the higher rates of mental health difficulties among the LGBTQI+ community allows us to consider how we, as individuals and a society, can support people in the community to live mentally healthy lives.

Most LGBTQI+ people are very resilient and will flourish with the support of allies, such as families, friends, and communities. An ally is someone who stands up for, supports, and encourages those around them. When used in the LGBTQI+ community, an “ally” refers to someone who supports the rights of LGBTQI+ people and promotes equity.

Importantly, allyship does not begin and end during Pride. Instead, it is rooted in our everyday actions.

Below are some examples.

It’s important not to assume that everyone in our lives, whether it be family members, friends, coworkers and so on, are heterosexual and cisgender. Don’t assume another person’s gender or pronouns (the terms they use to refer to themselves, which reflect their identity).

Noticing our tendencies towards assumptions, and mindfully challenging these, can help us to create a culture of “inviting in”, rather than an expectation on LGBTQI+ people to “come out”.

Using more inclusive language helps to create a welcoming atmosphere. For instance, rather than asking someone about their boyfriend/girlfriend or husband/wife, ask about their partner.

Part of being an effective ally means accepting that you won’t know everything, but are open to learning. Being supportive of LGBTQI+ loved ones and friends means taking the time to develop a true understanding of how they experience the world.

Take the time to listen. Remember, it is normal to worry about “saying the wrong thing”, but approaching conversations about sexuality and gender respectfully goes a long way.

Take the time to educate yourself. Seek out LGBTQI+ trainings, writings, and information to familiarise yourself with LGBTQI+ terminology, history, and the ongoing struggles the community continues to face. It is important we are active in this learning and that we do not expect the LGBTQI+ people in our lives to be our sole educators.

Stand up and speak out

If you hear someone make homophobic, biphobic, or transphobic “jokes” or comments, name it. Truthfully, this can be challenging, especially when those making such comments are family, friends, or colleagues. It is important to make your voice heard and, although not always easy, these are the situations where being an ally can really count.

Although Pride Month is awash with big parades and celebrations, with swathes of rainbow flags as far as the eye can see, it is also the other 11 months of the year where being a visible LGBTQI+ ally matters.

LGBTQI+ people can experience significant challenges when accessing mental health services. The My LGBTQI+ Voice Matters research highlighted fear of judgment, lack of understanding, or previous negative experiences with services as barriers for LGBTQI+ people. Having visible signs of openness and of allyship in our communities and workplaces (for example, flags, pins, or lanyards) can help to create an atmosphere of welcome, safeness, and acceptance of all sexual orientations and gender expressions.

GenderEd is an information resource for the families of gender variant children and transgender young people in Ireland.

LGBT Ireland offers a range of services to provide support and information for LGBTQI+ people. The service is also used by individuals questioning if they might be LGBT, as well as the family and friends of LGBTQI+ people, and professionals looking for information. LGBT Ireland also offers a range of services and resources for older LGBTQI+ adults, including the telefriending service and links to other supports, including:

Outhouse is a community and resource centre for LGBTQI+ people, their families, and their friends. It is based in Dublin city centre.

Outwest is a social and support group for gay men, lesbian women, and bisexual people in the west of Ireland.

Dublin Lesbian Line is a confidential support helpline, operated by a group of female-identified (LGBTQI+) volunteers on Thursday nights from 6.30pm until 9pm, available at 01 872 9911.

Gay Switchboard Ireland is Ireland’s longest running support service for the LGBT+ community. LGBT+ volunteers are available seven days a week on phone, email and online chat to offer confidential listening, support and information. It runs Monday to Friday from 6:30pm to 9pm; Saturday from 2pm to 6pm; and Sunday and bank holidays from 4pm to 6pm. Teo get in touch, call 01 872 1055.

LGBT Ireland also runs a confidential helpline for anyone who may need someone to talk to about LGBTQI+ issues at 1890 929 539.

If you are worried about your mental health, you can talk to a mental health nurse on our Support and Information Line for guidance and support.