Singing the praises of choirs

To celebrate World Music Day 2019, Professor Paul Fearon tells us about the important role that music can play in maintaining positive mental wellbeing and encourages us all to embrace our musical sides.

Frank Zappa said that “writing about music is like dancing about architecture”. In a sense, he was right: trying to capture the essence of music in words cannot do it justice.

Music plays such an integral part in our lives that no civilisation has yet been discovered that does not have music as part of its culture. Indeed, music is believed to predate spoken language in human evolution.

Attempts to define music range from the somewhat dry - “a series of organized reverberations through the air punctuated by silence” - to Claude Debussy’s definition which, although less technical, feels closer to the real truth: “music is the space between the notes. It is something to be felt… All of us know that music is every sound that reaches our ears and our heart says that it is something fabulous”.

So central a part does music play in our lives that many whose lives’ work has been devoted to the written word acknowledge music’s almost transcendental role. Jane Austen (“without music, life would be a blank to me”), Jack Kerouac (“the only truth is music”), and Maya Angelou (“music was my refuge. I could crawl into the space between the notes and curl my back to loneliness”), among others, all acknowledge the vital role of music in our lives. Even Albert Einstein said that “if I were not a physicist, I would probably be a musician… I live my daydreams in music. I see my life in terms of music.”

If music is such an innate part of our existence and acknowledged by so many to play a positive role in our lives, surely it must be good for us. Well, increasingly the evidence points to the fact that it is.

Harvard Medical School published a neat, then state-of-the-art summary on the relationship between music and health in 2011. In brief, it points to the beneficial effects of music on cognitive functioning, reducing stress, lifting mood in depression, reducing falls in those over 65, recovering from stroke, and possibly improving outcomes after heart attacks. There is also increasingly robust evidence that listening to music can reduce pain during and after surgery and may also reduce perception of pain in chronic pain conditions, including fibromyalgia.

As a psychiatrist, my role involves not only treating an acute episode of illness, but also attempting to reduce or even eliminate the chance of a future recurrence of that illness.

While many people may have factors unique to them in terms of making a sustained mental health recovery, there are five basic factors that are common to almost everyone. So basic and common are they, in fact, that most of us, regardless of the state of our mental health, should be doing them. These are, quite simply, regular exercise, a healthy balance between work and leisure pursuits, developing and nurturing positive social networks, a sensible sleep routine, and a healthy diet.

I was struck recently by coverage of comments made by Professor Sir Simon Wessely in relation to the attempts made by third-level institutions in the United Kingdom (UK) to deal with distress experienced by students. He argued that there were too many interventions being offered without an adequate evidence base; that they risked mislabelling understandable distress, such as loneliness and stress, as mental health disorders; and that, in his opinion, they would do far better by offering people a chance to join a choir or a drama group rather than seeing a counsellor.

Let’s consider this for a moment: one of the most distinguished psychiatrists in the UK is suggesting singing, rather than talking, to overcome distress (admittedly in a specific context). Well, I believe he is on to something, especially when we think about what being in a choir offers with reference to the five common factors associated with maintaining good mental health.

First, it’s social. Being in a choir is a wonderful way of quickly cultivating a social network with a common pursuit. Second, it adds to one’s ‘leisure’ or non-work-related activities. Third, singing is exercise. Your posture, vocal cords, diaphragm and neck muscles - to mention but a few - get a thorough workout during a session. Add to this the concentration of holding your line, of blending in with other voices, of following the conductor or choirmaster. And this is even before the sheer sense of joy of making music with a group of like-minded people: ask anyone who is a member of a choir how it feels during and after a practice or performance and they will almost invariably talk of a sense of the energy, almost euphoria, balance, and, at the same time, relaxation that follows. Finally, you’ll also almost certainly get a good night’s sleep following a session.

So being in a choir potentially targets four of those five elements of maintaining good mental health. Add in a healthy meal after a session and you’ve hit all five!

It always saddens me when someone says “I was told I can’t sing when auditioning for the school choir” or “I can’t hold a note: I’m tone deaf”. In many cases, they actually can sing, but believe, or have been told, that they can’t. True tone-deafness, congenital amusia, affects only about 4% of the population and refers to an inability to differentiate differences in pitch. However, most people who believe they can’t sing can distinguish notes and, therefore, could be trained to sing acceptably. It’s a real shame that significant numbers of people incorrectly believe they cannot sing and never get a chance to enjoy the experience.

In the UK, this barrier to joining a choir for those with less than perfect voices has been recognised and a number of “tuneless” choirs have come into existence (search for “tuneless choir” on the web and judge the results for yourself - they’re uplifting!). In Ireland, mainly Dublin so far, a slightly different but allied approach, such as through the LaLaLa Choir, has been adopted to encourage people who would not normally have the time to join a regular choir or feel their voice is not good enough, and this has been remarkably successful,. Hopefully, such initiatives will continue to grow.

In the meantime, whether it’s your regular choir night this evening, or whether you just want to take some time out, try to put 40 minutes aside; switch off your phone, television, computer or tablet, and listen with undisturbed wonder to some of the finest creations produced by mankind, whether it’s a Haydn string quartet, some Schubert lieder, a John Martyn or Judee Sill album... or better still, investigate whether there’s a choir in your area and take the plunge. It may just be the most positive thing you do for your overall wellbeing this year.

And remember Schumann’s advice to aspiring musicians: “when you play, never mind who listens to you”. 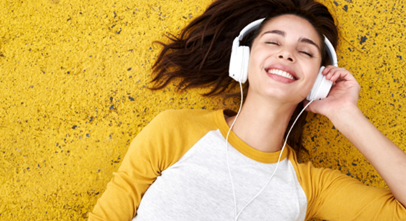 When music hits you, you feel no pain

This Walk In My shoes blog post gives an excellent overview of music therapy.

Returning to work after a mental health difficulty