The WMHN is a collaboration between St Patrick’s Mental Health Services (SPMHS) and the National Women’s Council of Ireland (NWCI), marking its third event since its launch in 2018 to coincide with the wordwide 16 Days of Action on Violence against Women campaign.

The event heard from speakers Gillian Dennehy, Services Manager of Women’s Aid, and Felicity Kennedy, clinical supervisor and psychotherapist, as well as Ellen O'Malley Dunlop, Chair of the NWCI.

One in four women in Ireland have experienced physical and/or sexual violence, marking a profound effect on women’s mental health and wellbeing. Women who experience domestic violence are three times more likely to be affected by depression, anxiety or other acute mental health conditions, such as schizophrenia or bipolar disorder, than other women.

You can see photos from the event below, or find out more about it here.

Combatting complex issues like domestic violence and addressing their outcomes meaningfully requires cross-sectoral and multi-faceted responses which stretch across every aspect of our society. Creating the collaborative space for this to happen, and ensuring women’s perspectives at the centre of it, is one of the fundamental reasons we developed the WMHN. 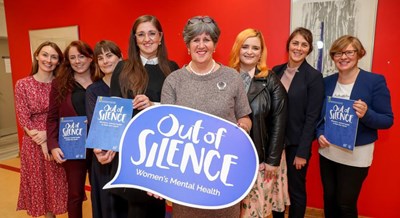